PNTL has successfully completed over 180 shipments of used nuclear fuel, vitrified high-level waste, mixed oxide (MOX) fuel and plutonium since it was established in 1975.

The PNTL ships were designed after wide consultation with Lloyds of London, the Salvage Association and leading salvage companies. They have cargo compartments protected by a double hull configuration and duplication and separation of all essential systems. This means that if any important system fails during a voyage, there is always a back-up ready to be brought into operation.

Each PNTL ship undergoes regular maintenance inspections and operational equipment is checked and tested prior to each voyage from PNTL’s home port of Barrow, England. 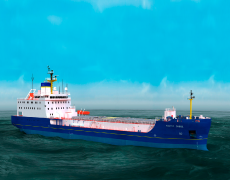