The PNTL Safety In Depth system provides much greater protection than typically exists for much more common shipments of hazardous cargo, such as chemicals, oil and liquid gases. This means that PNTL is not reliant on specialist emergency assistance being available from countries adjacent to shipping routes.

The ships have been designed to travel non-stop between Europe and Japan, they are routed away from areas of international instability and do not travel through seas that are considered vulnerable to acts of piracy.

PNTL ships have a satellite weather routing system and also use professional shore-based maritime services that provide up to the minute local meteorological data. Together with prudent voyage scheduling procedures, these systems enable the ships to follow the safest routes and avoid severe weather patterns.

While at sea, PNTL ships maintain a communications link with a report centre that is manned 24 hours a day. This voyage monitoring system automatically reports the vessel’s latitude and longitude, speed and heading every two hours. If a message is not received by the report centre within a pre-determined time, PNTL’s emergency response system is automatically activated. This system is backed up with secondary systems such as satellite and radio telephones.

Transportation and nuclear experts in Europe are always available to provide technical support to the ships and, in line with International Atomic Energy Agency (IAEA) recommendations a fully trained and equipped team of nuclear experts is available on a 24-hour emergency standby system. In the event of an emergency, this team would be dispatched to the ship and would direct and manage all remedial operations.

PNTL contracts with one of the world’s most experienced international salvage experts, Ardent, which has operations in all regions of the globe and is able to respond quickly to requests for assistance.

Ardent has successfully recovered large vessels from the seabed. Each PNTL ship is equipped with a sonar location system capable of operating in up to 10,000 metres of water. Special monitors in the holds are able to provide information to a salvage team about the position of the ship, its depth and the status of the cargo.

PNTL holds several training exercises each year to test its emergency response procedures, the communication systems, the expertise of team members and the ships’ crews and the performance of equipment. 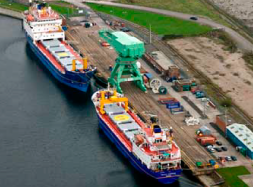