PNTL vessels also have a history of supporting international nuclear non-proliferation programmes. For example in 2003 two vessels transported plutonium from the United States to France as part of the US-Russian programme to dispose of surplus nuclear weapons. The material was made into MOX fuel in France, before PNTL vessels returned it to the US in 2005 where it was used to generate electricity in a nuclear reactor. 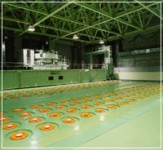