Barriers – the material itself

Working from the radioactive material to the outside environment, the first engineered barrier is the material itself, which is usually used nuclear fuel, vitrified waste or MOX fuel.

Used nuclear fuel and newly-manufactured MOX fuel comprise of solid pellets contained within sealed, corrosion-resistant metal fuel rods. They are designed to withstand the extreme heat and pressures of a nuclear reactor. In turn, the fuel rods are loaded into assemblies.

High-level nuclear waste is transformed from a liquid into a solid by mixing it with borosilicate glass – vitrifying it. The vitrified waste is solid, stable and passive, making it ideal for transportation and long-term storage.

Each material, if exposed to seawater, would maintain its integrity over long periods. None would dissolve readily – they would behave in much the same way as a marble in a glass of water.

In other words, if this material were somehow to become exposed to seawater, even though it is highly radioactive, the environmental impact would be negligible.

Environmental impact assessments have calculated that the maximum radiation exposure to the public in such a scenario would be more than 1,000 times smaller than radiation levels found naturally in the environment. 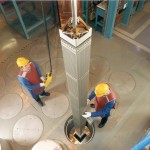